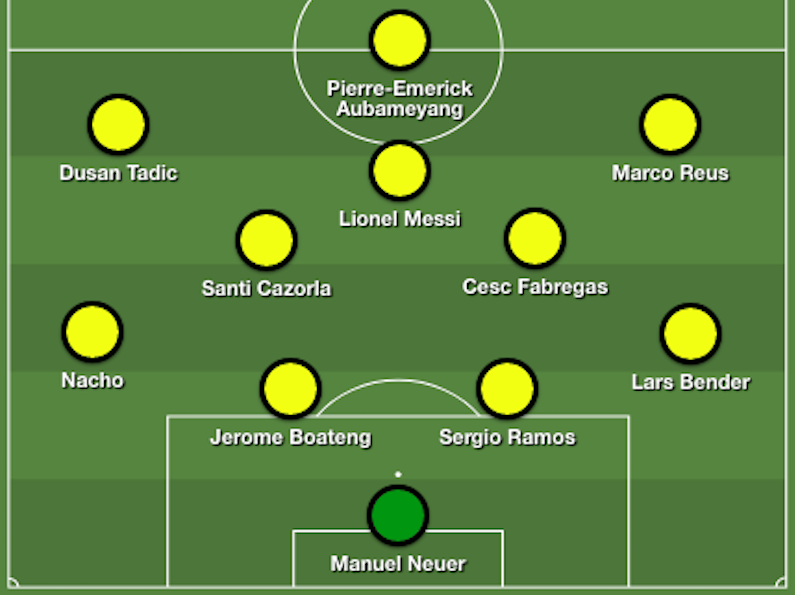 With most of the soccer calendar still on hold, BetSkillsPro’s editors took the opportunity to take stock of the sport’s landscape. Gordon Brunt, Michael Chandler, Anthony Lopopolo, Gianluca Nesci, and Daniel Rouse participated in a fantasy mock draft with just one stipulation: Players had to be 30 or older to be eligible for selection.

Analysis: What, you were expecting something else off the top? Messi and Ronaldo were always going to be the first two players taken. This draft really got going at No. 3 overall, where Rouse tips Bayern Munich scoring machine Lewandowski as the best of the rest.

Analysis: One thing became abundantly clear to each of our five managers as they compiled their draft research: Elite full-backs over the age of 30 are in extremely short supply. Nesci, Rouse, and Lopopolo all move quickly to solidify either the right- or left-back position.

Analysis: Differing strategies are starting to take shape. After adding another attacker to his Messi-led squad in the second round, Chandler solidifies his backline with Real Madrid captain Ramos. With a right-back, two midfielders, and a forward also coming off the board, this is the most varied round of the early proceedings.

Analysis: Though both clubs have invested in some impressive young talent in recent years, Round 5 continues to highlight the veteran presence at both Juventus and Real Madrid. The two European heavyweights account for 11 of the 25 players chosen through five rounds.

Analysis: It took until the sixth round, but a player from outside Europe’s traditional powers finally comes off the board; Gomez is the creative engine powering Atalanta’s high-octane attack. Chandler springs for Nacho, who has the critical ability to play multiple positions.

Analysis: Goalkeeper alert! Chandler is the first to take the plunge by snapping up the 34-year-old Neuer, who recently extended his stay at Bayern Munich. Round 7 also features the first selection of a player who doesn’t ply his trade in Europe, as Brunt grabs well-traveled Brazilian icon Alves.

Analysis: Round 8 is (almost) all about the defenders. After Matuidi kicks off the proceedings, three center-backs follow. Even Gueye, the ball-winning machine who has slotted nicely into PSG’s midfield, is a defensive-minded selection by Lopopolo.

Analysis: Getting Immobile in the ninth round represents excellent value for Nesci. The Italian striker turned 30 in February and was enjoying a spectacular Serie A season with Lazio before the work stoppage, racking up a league-leading 27 goals in 26 appearances.

Analysis: Unsurprisingly, just about everybody has waited until the final two rounds to address goalkeeping. Chandler, who made the early move for Neuer, is the only one already set between the sticks. Free to look elsewhere, he opts for the elder of the Bender twins.

Analysis: The final round is usually for plugging a hole and rounding out your lineup, not finding a potential headliner for your squad. Don’t tell that to Lopopolo, who’s only gone and knocked it out of the park by stealing Suarez at the last.

Who was the most egregious snub? Have your say in the comments.

Remember when we said there was a severe shortage of quality full-backs in this draft class? That was decidedly not the case when it came to the forwards. Gonzalo Higuain, Zlatan Ibrahimovic, Dries Mertens, Edinson Cavani, Jamie Vardy, Diego Costa, Edin Dzeko, Olivier Giroud, and Carlos Vela were all left on the board.

Considering the spectacular season he was putting together at Atalanta, Josip Ilicic would also feel aggrieved not to have been selected – hypothetically, of course. Alexis Sanchez, Fernandinho, David Luiz, and Gianluigi Buffon are also high-profile omissions.

Arsenal star Aubameyang leads the line for a side boasting a variety of creative playmakers. The central defensive duo is rock solid and can play a high line and press up the field thanks to the presence of Neuer. Of course, when all else fails, Chandler has the Messi trump card to get out of trouble.

This team is both balanced and explosive. Ronaldo and Suarez together up front is truly unfair. Seriously, how did everybody else let that happen? The midfield – outside of suave playmaker Ozil – is more combative than creative, but the ultra-attacking presence of Marcelo bombing up the left flank helps compensate for some of that.

Team Rouse has a strong Balkan presence across the midfield, with Perisic keeping the theme going up front. Throw in some Brazilian flair on the other wing and arguably the most prolific striker alive today, and you’re looking at an impressive front six. The defense is perhaps not as flashy as some others, but it’s solid.

Immobile and Aguero form a daunting partnership up front, while a crafty midfield spearheaded by the wizardry of Gomez will create plenty of scoring chances for both. The full-backs, too, are excellent attacking outlets. Bonucci and Hummels, though not particularly fleet of foot, will kick-start plenty of moves with their passing ability out of the backline.

Team Brunt has an excellent complement of pace, creativity, and work rate across the pitch, while Muller is one of the game’s true wild cards thanks to his ability to drift about and find pockets as space appears. Kroos is going to love picking out passes from midfield in this lineup, especially as he seeks out a pair of club teammates.

Vote for your favorite team below, and sound off in the comments!


Anatomy of a Classic Goal: James Rodriguez and the perfect volley